What you need to know when the Board comes knocking at your door?

Article 15 of Turkey’s Law on Protection of Personal Data No. 6698 (‘LPPD’) allows the Personal Data Protection Board (‘the Board’) – the decision-making authority within the Personal Data Protection Authority (‘KVKK’) – to carry out investigations on its own initiative, or when it receives complaints. However, unlike the General Data Protection Regulation (Regulation (EU) 2016/679) (‘GDPR’), the LPPD does specify the regulator’s powers. Burcu Tuzcu Ersin and Ceylan Necipoğlu, Partner and Senior Associate respectively at Moroglu Arseven Avukatlık Ortaklığı, take us through every key aspect of the Board’s investigatory and enforcement powers, from how and why the Board may conduct investigations to the appellate mechanisms available to data controllers subject to the Board’s decisions.

The Board can initiate surveillance and legality monitoring investigations either ex officio or as a result of a data subject’s complaint.

The Board will only consider complaints if they fit the following requirements as prescribed by Article 6 of the Law on the Exercise of the Right to Petition No. 3071 (‘Law No. 3071’):

When a complaint covering the above requirements is duly filed, it will be examined by the Board, and the Board can decide to initiate an investigation against data controllers or can decide to decline the complaint. If complainants do not receive an affirmative or negative respond within 60 days from the Board informing them that their complaints have been dismissed, complaints are deemed to be declined without any further notice. Complainants can approach administrative courts to review decisions to dismiss complaints.

Scope and limits of the Board’s authority

The Board’s investigative authority is vested under Article 15 of the LPPD, though without any attributions clarifying specific extent or limit. Article 15(3) of the LPPD sets forth that data controller shall, within 15 days upon notice, deliver to the Board all information and documents, except for those qualifying as state secrets. Obviously, the Board’s investigative authority under this clause finds its limit under Article 22 of the LPPD, which sets forth the authorities of the Board. Furthermore, the authority of the board should be, save for the restrictions arising from the Constitution and basic principles of administrative law, interpreted only as broadly as the specific circumstances of the incident at hand require. If the same results can be achieved as effectively by using less public force, the use of exceeding public force cannot be regarded as proportional and therefore lawful. The Board would indeed be expected to use its authorities in the same manner as would be expected from any administrative authority under the general principles of Turkish administrative law and should always adhere to the principle of lawfulness, fairness, proportionality and transparency.

Unlike GDPR, the territorial scope of the LPPD is not explicitly stipulated. In the absence of such territorial scope, the applicability of the LPPD and whether the Board would have jurisdiction on any specific incident shall be evaluated based on the sanctions that are attributed to each such incident. Article 18 provides the misdemeanours related to the violation of the law. Therefore, in each case where the Board uses its investigative authority, the assessment should be made on the basis of the application rules based on territory under the Misdemeanors Law No. 5326 (‘the Misdemeanors Law’), which addresses the topic to the Turkish Criminal Code’s related provisions. In case the incident is determined to fall within the scope of the territorial scope of the LPPD, the Board would have the authority to investigate the incident, reach a decision and enforce the given decision regardless of data controller having its registered address in Turkey or in abroad.

On-file investigations are conducted on the base of a notification letter sent to data controller whereby the Board requests information and documents needed to resolve the case. Article 15(3) of the LPPD sets forth that data controller shall, within 15 days upon notice, deliver to the Board all information and documents, except for those qualifying as state secrets.

The data controller is obliged to enable on-site inspection and provide all information requested within the authority of the Board. In case the Board’s information and document requests, which are made on the grounds of an initial decision of the Board for launching the investigation, are not satisfied, an administrative fine can be imposed on data controller as prescribed by Article 18(3) of the LPPD.

By taking into consideration all information, documents, evidence and defence letter provided by the data controller under the investigation made upon complaint or ex officio, the Board can either decide on the existence of infringement or decide to decline the complaint if no infringement can be detected.

In case an infringement is determined by the Board, it shall;

Separate administrative fines can be imposed for each item above. The gap between the minimum and maximum amount of fine is intentionally kept broad in the LPPD, so it is possible to say that the amount of the fine is at the Board’s discretion, which shall be given in line with the general principles of Turkish Law. In particular, as required under Article 17(2) of the Misdemeanors Law, the Board shall decide on the weight of sanction in each case upon its evaluation of:

In this manner, the same infringement made by different data controllers may be fined by the Board differently due to these variables.

Notification and publication of the Board’s decisions

Appeal and enforcement of the Board’s decisions

Assuming that only an administrative fine is imposed on the data controller, as the administrative fines are regulated by the Misdemeanors Law no matter under which regulation they are stipulated, the appellate mechanism under Article 27 of the Misdemeanors Law applies. According to this, a decision of the Board may be challenged by a data controller before the Criminal Court of Peace within 15 days as of the notification or pronunciation date of the decision. If no request of appeal is made within this period, the decision becomes final. 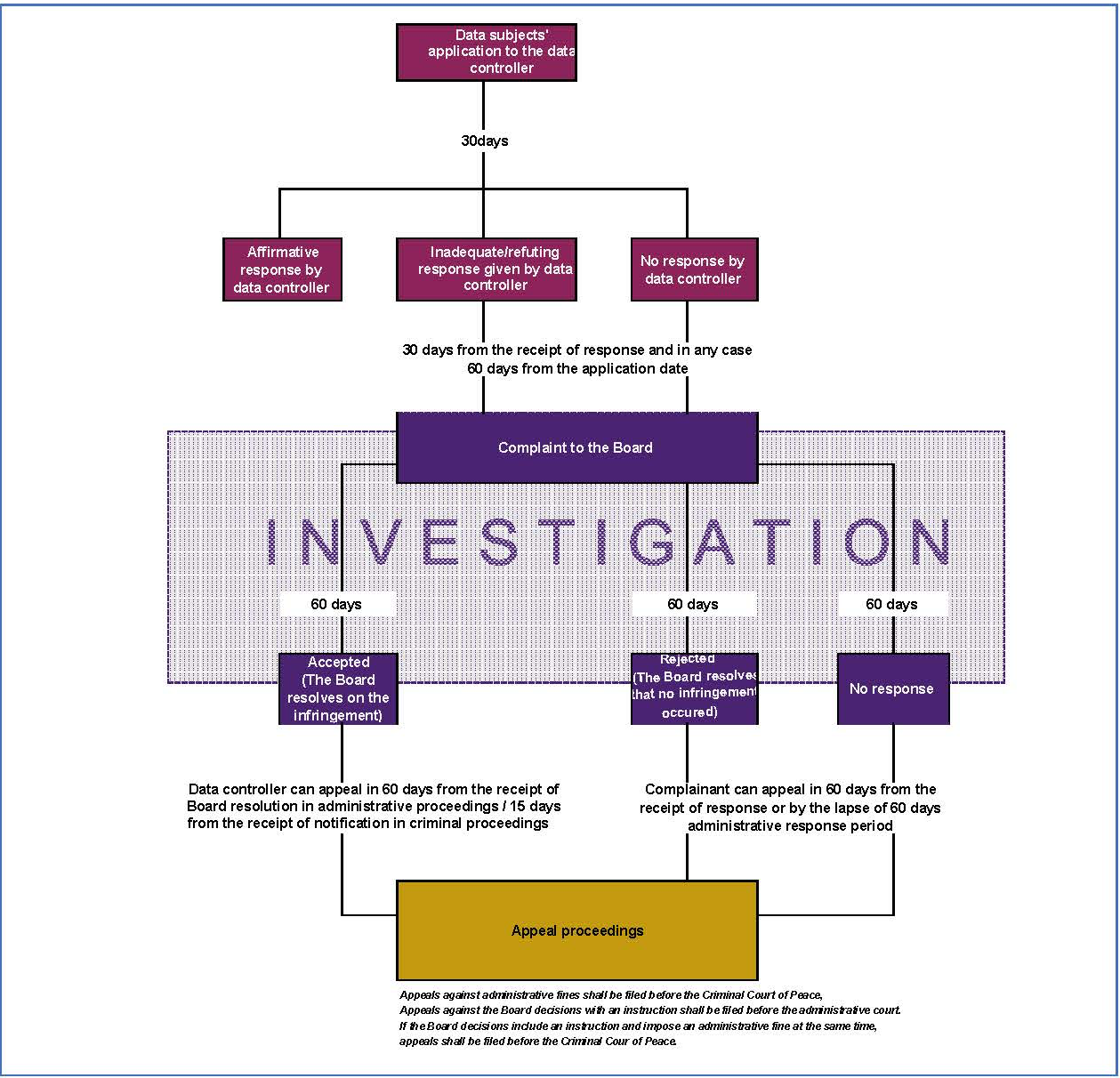